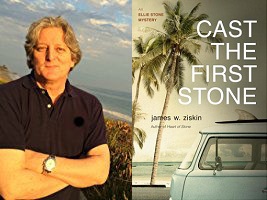 February 1962: Tony Eberle has just scored his first role in a Hollywood movie, and the publisher of his hometown newspaper in upstate New York wants a profile of the local boy who's made good. Reporter Ellie Stone is dispatched to Los Angeles for the story. But when she arrives on set to meet her subject, Tony has vanished. The director is apoplectic, Tony's agent is stumped, and the producer is found murdered.
Ellie is on the story, diving headfirst into a treacherous demimonde of Hollywood wannabes, beautiful young men, desperately ambitious ingenues, panderers, and pornography hobbyists. Then there are some real movie stars with reputations to protect. To find the killer, Ellie must separate the lies from the truth, unearthing secrets no one wants revealed along the way. But before she can solve the producer's murder, she must locate Tony Eberle.

THE ELLIE STONE MYSTERIES HAVE BEEN FINALISTS FOR THE EDGAR, ANTHONY,  BARRY, AND LEFT COAST CRIME “LEFTY” AWARDS

James Ziskin grew up in Amsterdam N.Y. and now lives in the Hollywood Hills. His mysteries have been nominated for a variety of prestigious awards. Mr Ziskin studied romance Languages and Literature at the University of Pennsylvania. He spent 15 years in the Hollywood post production industry.