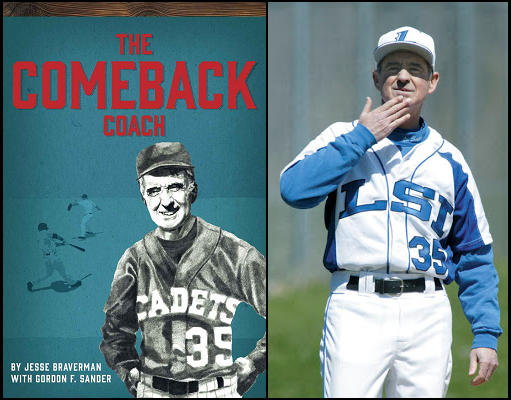 In 2000, after a long bureaucratic struggle straight out of Kafka, Jesse Braverman
was removed as coach of the varsity baseball team of Bethlehem Central High School
of Bethlehem, New York, nearly destroying him. Later hired by La Salle Institute of Troy,
Braverman took its baseball team, the Cadets, to new heights, including an unprecedented
twenty-seven-game winning streak.
Written with distinguished journalist and his long-time friend Gordon F. Sander,
The Comeback Coach tells the story of Braverman’s remarkable, dual career as multi-sport
athletic coach and special education teacher. Packed with human interest, Coach follows Jesse’s
forty-year journey from the sandlot baseball fields of his youth, learning about life and baseball
at the knee of his mentor, Joe Austin—with whom he would be elected to
the New York State Baseball Hall of Fame.