Michael DeMasi will be signing his new book What They Said: 25 Years of Telling Stories.

A salvager, an Irish priest, a wealthy socialite, a farmhand, and an Upstate New York mayor are some of the people Mike DeMasi interviewed in 25 years in journalism. In his book, he shares some of his favorite stories.

Mike DeMasi’s collection of articles from 25 years of journalism belies the notion that newspaper stories are here today, gone tomorrow. His stories, bringing to life the characters of upstate New York life, are very much still here. From artists to mayors, bicyclists to jewelers, he has met them all and has kept them alive through his sympathetic reporting. Meet here the mayor who tried to give new life to a dying industrial city by attracting immigrants from Guyana; a socialite who owns 40 dogs and picks up their poop; a landscape painter who emerged from a gritty mill town. The newspapers in which the stories first appeared may molder away, but the people portrayed in them live on in this book. May there be a Volume 2. – Carl Strock, local columnist and author

Michael DeMasi has worked as a newspaper reporter since graduating from Ithaca College in 1991, including covering Schenectady City Hall for the Daily Gazette. He continues to be fascinated by the people he meets from all walks of life. His stories have won awards on the state and national level. He lives with his family in Clifton Park. 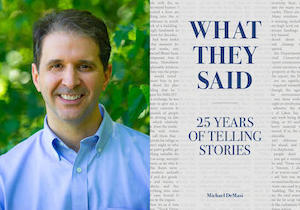