"Bootlegger of the Soul: The Literary Legacy of William Kennedy"

By Suzanne Lance and Paul Grondahl 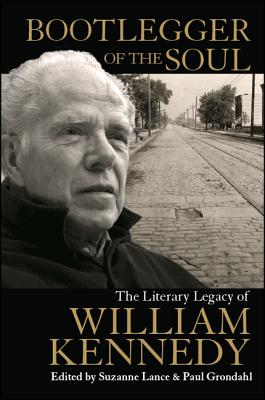 Here at the Open Door Bookstore, on Sunday October 13th from 1-2:30 pm, we welcome William Kennedy and editors Suzanne Lance and Paul Grondhal for the signing of “Bootlegger of the Soul"

"The award-winning novelist William Kennedy is perhaps best known for his Albany Cycle, a series of novels that put Albany on the world's literary map alongside James Joyce's Dublin, Gabriel Garc a M rquez's Macondo, and William Faulkner's Yoknapatawpha County. Bootlegger of the Soul offers a fresh and authoritative overview of Kennedy's long literary career and his astonishing trajectory from journalist to struggling novelist to Pulitzer Prize winner. Included here are reviews, interviews, and scholarly essays on Kennedy's work, as well as essays, speeches, a play, and a short story by the author himself, together with a total of fifty historical and personal photographs. Lively, readable, and brimming with the infectious wit and lyrical prose that animates Kennedy's novels, Bootlegger of the Soul is a celebration of a writer still working hard at his craft at age ninety."